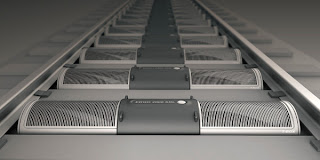 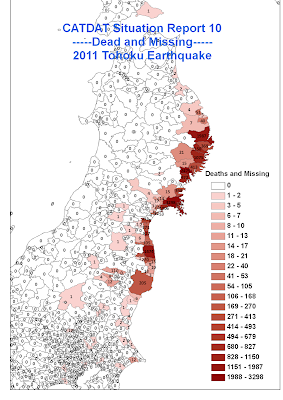 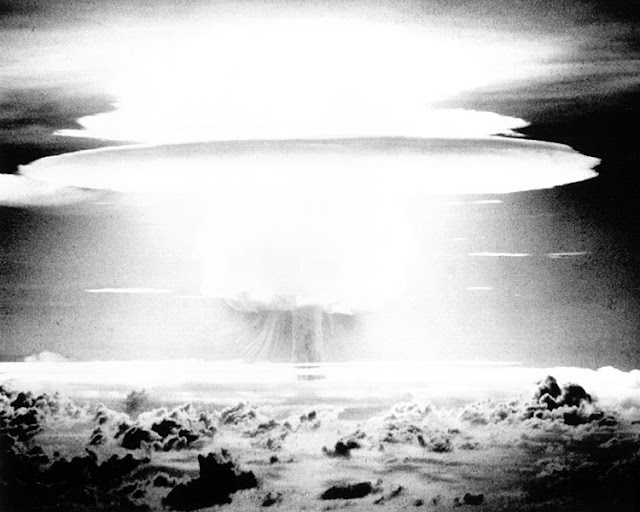 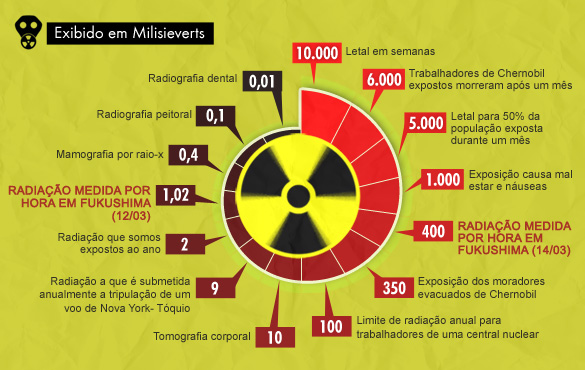 Já fiz aqui a minha auto-crítica por me ter precipitado na avaliação do modo como as centrais nucleares japonesas teriam resistido aos efeitos do terramoto com tsunami que afectou aquele país, bem como por ter subestimado o próprio efeito desse cataclismo.
A situação está longe de estar sob controlo mas, entretanto, os ecotópicos europeus, com realce entre nós para o jornal "O Público", têm aproveitado a situação para lançarem freneticamente as mais mistificadoras campanhas alarmistas e mentirosas, falando em "apocalipse" e insinuando que se têm estado a verificar explosões nucleares na central de Fukushima I, a mais afectada das 50 existentes no Japão.
Acontece já ser possível encontrar informação objectiva, científica e rigorosa sobre o que se tem estado a passar, sendo de realçar o site do MIT que mantém actualizada informação fresca e pedagógica sobre o assunto, validada pelos profundos conhecimentos dos melhores especialistas americanos.
Vou, por isso, fazer uma transcrição da informação disponível e relevante sobre o ocorrido até ao momento.
O texto que se segue é da autoria de um eng.º nuclear americano reformado, redigido a pedido da filha (uma estudante de doutoramento do MIT), e foi depois adoptado pelo próprio MIT no seu site, como elemento pedagógico.
The plants at Fukushima are Boiling Water Reactors (BWR for short). A BWR produces electricity by boiling water, and spinning a turbine with that steam. The nuclear fuel heats water, the water boils and creates steam, the steam then drives turbines that create the electricity, and the steam is then cooled and condensed back to water, and the water returns to be heated by the nuclear fuel. The reactor operates at about 285 °C.
The nuclear fuel is uranium oxide. Uranium oxide is a ceramic with a very high melting point of about 2800 °C. The fuel is manufactured in pellets (cylinders that are about 1 cm tall and 1 com in diameter). These pellets are then put into a long tube made of Zircaloy (an alloy of zirconium) with a failure temperature of 1200 °C (caused by the auto-catalytic oxidation of water), and sealed tight. This tube is called a fuel rod. These fuel rods are then put together to form assemblies, of which several hundred make up the reactor core.
The solid fuel pellet (a ceramic oxide matrix) is the first barrier that retains many of the radioactive fission products produced by the fission process. The Zircaloy casing is the second barrier to release that separates the radioactive fuel from the rest of the reactor.
The core is then placed in the pressure vessel. The pressure vessel is a thick steel vessel that operates at a pressure of about 7 MPa (~70 atmosferas), and is designed to withstand the high pressures that may occur during an accident. The pressure vessel is the third barrier to radioactive material release. 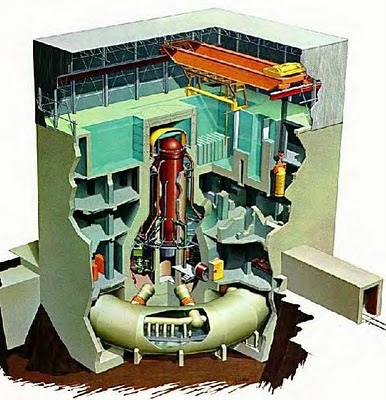 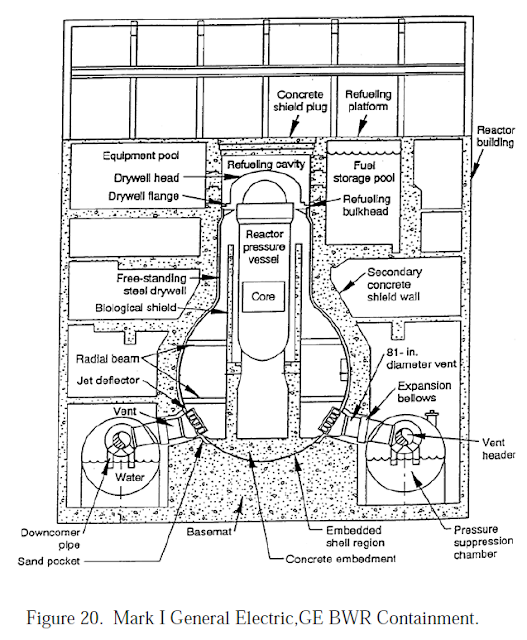 Explosions at units 1 and 3 occurred due to similar causes. When an incident occurs in a nuclear power plant such as a loss of coolant accident or when power is lost, usually the first response is to depressurize the reactor. This is done by opening pressure relief valves on the reactor vessel. The water/steam mixture will then flow down into the suppression pool, which for this design of a reactor is in the shape of a torus (technical term for the shape of a donut). By blowing the hot steam into the suppression pool some of the steam is condensed to liquid phase, which helps keep the pressure low in the containment.
The pressure in the reactor vessel is reduced  by  venting the water/steam mixture. It is much easier to pump water into the vessel when it is at a reduced pressure, thus making it easier to keep the fuel cooled. This procedure was well underway after the earthquake. Unfortunately, because of the enormous magnitude of the earthquake, an equally large tsunami was created. This tsunami disabled the onsite diesel generators as well as the electrical switchyard. Without power to run pumps and remove heat, the temperature of the water in the reactor vessel began to rise.
With the water temperature rising in the core, some of the water began to vaporize and eventually uncovered some of the fuel rods. The fuel rods have a layer of cladding material made of a zirconium alloy. If zirconium is hot enough and is in the presence of oxygen (The steam provides the oxygen) then it can undergo a reaction that produces hydrogen gas. Hydrogen at concentrations above 4% is highly flammable when mixed with oxygen; however, not when it is also in the presence of excessive steam.
As time went on, the pressure in the containment rose to a much higher level than usual. The containment represents the largest barrier to the release of radioactive elements to the environment and should not be allowed to fail at any cost. The planned response to an event like this is to vent some of the steam to the atmosphere, just to keep the pressure under control.
Exactly what happened next is not verified; however, the following is very likely the general explanation for the explosion. It was decided to vent the steam through some piping that led to a space above and outside containment, but inside the reactor building. At this point, the steam and hydrogen gas were mixed with the air in the top of the reactor building. This was still not an explosive mixture because large amounts of steam were mixed with the hydrogen and oxygen (from the air). However, the top of this building is significantly colder than inside the containment due to the weather outside. This situation would lead to some of the steam condensing to water, thereby concentrating the hydrogen and air mixture. This likely went on for an extended period of time, and at some point an ignition source (such as a spark from powered equipment) set off the explosion that was seen in units 1 and 3. The top of the reactor building was severely damaged; however, the containment structure showed no signs of damage.
Right after the explosions there were spikes in the radiation levels detected, because there were some radioactive materials in the steam. When the zirconium alloy cladding reacted to make hydrogen, it released some fission products. The vast majority of the  radioactive materials in the fuel will remain in the fuel. However, some of the fission products are noble gases (xenon, Xe and krypton, Kr) and will immediately leave the fuel rods when the cladding integrity is compromised. Fortunately, Xe and Kr are not a serious radiological hazard because they are chemically inert and will not react with humans or plants. Additionally, small quantities of iodine (I) and cesium (Cs) can be entrained with the steam. When the steam was vented to the reactor building, the Xe and Kr would have followed as well as some small amounts of I and Cs. Thus, when the roof of the reactor building was damaged, these radionuclides that were in the reactor building would have also been released. This is the reason a sudden spike was seen in radiation levels. These heightened radiation levels quickly decreased. This is because there was no damage to the containment which would increase the quantities of radionuclide released, and because the radionuclides released during the explosion quickly decayed away or dispersed.

Unit 2 explosion
Recent information indicates that unit 2 may have suffered a containment breach. Pressure relief of unit 2 was complicated by a faulty pressure relief valve, which complicated the injection of sea water and the evacuation of the steam and hydrogen. It is reported that the fuel rods were completely exposed twice. More details to follow.
Unit 4 fire
A fire was reported at unit 4 which was in a shutdown state during the earthquake and tsunami for a planned outage.  Latest reports indicate that the fire was put out. More details to come.
Confirmation of loud sounds this morning came from the Nuclear and Industrial Safety Agency (NISA). It noted that “the suppression chamber may be damaged.” It is not clear that the sounds were explosions. 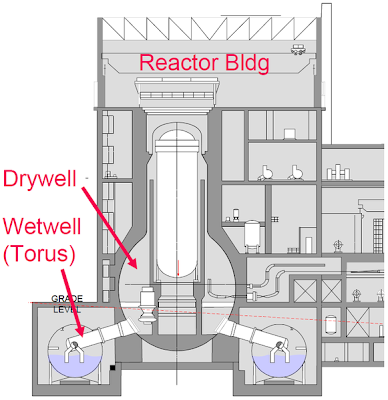 Also known as the torus, this large doughnut-shaped structure sits in the centre of the reactor building at a lower level than the reactor. It contains a very large body of water to which steam can be directed in emergency situations. The steam then condenses and reduces pressure in the reactor system.
The pressure in the pool was seen to decrease from three atmospheres to one atmosphere after the noise, suggesting possible damage. Radiation levels on the edge of the plant compound briefly spiked at 8217 microsieverts per hour but later fell to about a third that.
A close watch is being kept on the radiation levels to ascertain the status of containment. As a precaution Tokyo Electric Power Company has evacuated all non-essential personnel from the unit. The company’s engineers continue to pump seawater into the reactor pressure vessel, in an effort to cool it.
Prime minister Naoto Kan has requested that everyone withdraw from the ten kilometer evacuation zone around the nuclear power plant and that people that stay within remain indoors. He said his advice related to the overall picture of safety developments at Fukushima Daiichi, rather than those at any individual reactor unit.
Explosion at Unit 2
It was reported earlier today that the explosion at Unit 2 of the Fukushima Daiichi plant damaged the suppression chamber. As discussed in the previous paragraph, the suppression chamber/torus (i.e. donut shape vessel containing water) is used to depressurize the reactor. The suppression pool is designed to condense the hot steam from the reactor, but can only do so as long as sufficient cold water remains in it.  It should also be noted that the suppression pool is part of the primary containment.

Hydrogen gas from the cladding oxidation with steam collected in the suppression pool and ignited. This scenario differs from those of units 1 and 3 where the explosion occurred outside the primary containment in the upper part of the reactor building.  The reasons why the steam/gas mixture was not released to the reactor building are still not clear. This breach of primary containment is certainly more serious than the situation in units 1 and 3.  Seawater is still being pumped in the containment and the reactor vessel.  At this time radioactive releases from unit 2 have been similar to the ones seen from units 1 and 3. 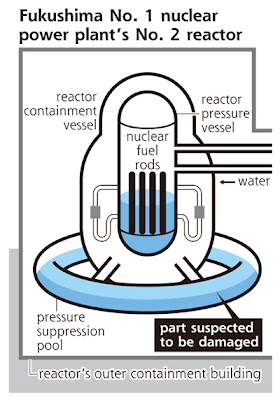